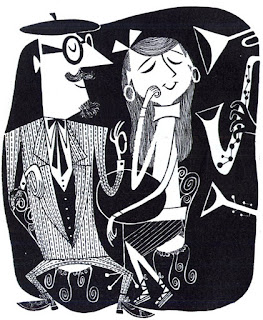 A slide trombone fills in for the tenor giving the jazz quintet a different texture. Their version of Eddie Palmieri’s Listen Here is delightful with the trumpet and trombone. The evening gets better and more interesting. A young lady, who manages the tasting room bar of a local boutique distillery, and her boyfriend, rush in breathless saying, “I’m playing hooky from my job, but have been dying to come here—can’t stay long.” I wave them in. “I’ll be leaving in about 30 minutes—can I come back later after I close our place and I’ll pay you then.” I say jokingly, “Yes, but the price of re-admission will be a bottle of your gin.” The distillery’s gin is exceptional and has literally won awards for small batch gin. An old singer in the audience was invited on stage to sing a few songs. In a strong, clear voice he belts out a couple of Sinatra tunes and finishes with Hello Dolly, sung at times in a Louie Armstrong voice. The night was nearing its end and the tenor showed up from his previous gig and jumps in with the trumpet and trombone to create a terrific horn blending. I'm outside folding up the tables and chairs for the smokers when two bicyclists whiz into the scene and start locking up their bikes. “I’m back…and here’s your gin.” You knew I was joking, right? “Yeah, but you ARE The Doorman, so I figure you deserve this.” Amazing, I thought, someone who accords me the respect I deserve. I thank them profusely and urge them inside to enjoy the last 30 minutes of music. After folding up the sidewalk I sit at the bar and enjoy a drink. A couple I haven’t seen in awhile arrives and sits at the opposite end. They catch my attention and I nod my greeting. When leaving for the night, I chide them for showing up late. We talk and I learn that she lives about 200 miles away. I say, “It’s clear… you need to move here.” She says, “I would… but I’m a traditionalist and he hasn’t proposed yet.” I ask them my 10 questions of compatibility to confirm the obvious… they are a perfect-match pair. “I don’t see any reason why you shouldn’t be married, so as The Doorman I plan to invoke my authority as The Doorman of the Jazz Club to officially wed you right here and now—are you both willing to do what is obvious and predestined?” With their agreement, I join their hands, which I hold tight in mine, and have them exchange vows. In the sacred hall of Miles, Ornette, Dexter, Grover, Monk,and Sonny I had officiated... and a union is consecrated!
Posted by Jeff Winke at 8:35 PM