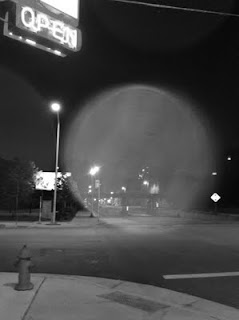 A summer Saturday night and the city is alive with options. Being a hidden away locale and being jazz always limits the crowd. As The Doorman for the jazz club I was at my post and with my stern, but welcoming, face set as the night began. Jazz aficionados filtered in, but it’s always a lean night when the number can be counted on a full-fingered pair of hands. The jazz quintet played hard. The bass and keyboard player were stand-ins and pushed the group to play differently. It was the kind of night that I fully expected to see a couple of Realm Dwellers… Alternate Realm Dwellers to be exact. Their visits are rare, not Bigfoot rare, but definitely out of the norm. Realm Dwellers are as the name suggests, occupants of a different existence than 99% of us. O.K., I know I sound crazy… but bear with me. On random and rare occasions, we get customers who show up within a half hour of closing. They have a different look and aura. It’s as though they walked off the pages of a comic book or the cover of the Beatles’ Sargent Pepper’s Lonely Hearts Band Album. They are eccentric-looking… a bit of a hard edge… and beaten down. When they come as couples, they are mismatched—an argyle sock with a striped one. It is clear they are most comfortable in a post-midnight world. They don’t stay long and appear to be the Roma of the night, drifting as gypsies do from place to place. Mystics on the run. They clearly dwell in a different realm.
Posted by Jeff Winke at 9:03 AM 1 comment:

It hangs at The Art Institute of Chicago and is worth visiting the museum just to see it. Edward Hopper had such an intense capacity to capture human aloneness—that feel-it-to-the-core sense of singularity. The Nighthawks painting (1942) exquisitely captures the fact that we are alone in our lives. Here’s how the painting is described by the Art Institute: 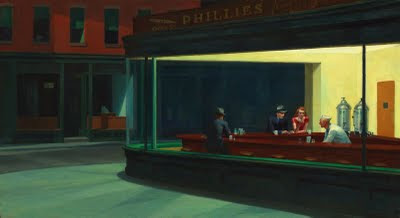 Edward Hopper said that Nighthawks was inspired by "a restaurant on New York's Greenwich Avenue where two streets meet," but the image, with its carefully constructed composition and lack of narrative, has a timeless quality that transcends its particular locale. One of the best-known images of 20th-century art, the painting depicts an all-night diner in which three customers, all lost in their own thoughts, have congregated. Fluorescent lights had just come into use in the early 1940s, and the all-night diner emits an eerie glow, like a beacon on the dark street corner. Hopper eliminated any reference to an entrance, and the viewer, drawn to the light, is shut out from the scene by a seamless wedge of glass. The four anonymous and uncommunicative night owls seem as separate and remote from the viewer as they are from one another.
Posted by Jeff Winke at 5:46 PM No comments: 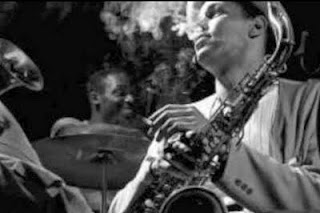 My parking spot in front of the jazz club was taken up by a pair of Harleys. The riders, a pair of middle-age guys out for a warm-evening ride, were bellied up to the bar. They were chatting with the bartender and one of them was a reminiscer. I know a couple of reminiscers but generally choose not to hang out with them since there is little original thought when their monologues begin with “Do you remember when…” or “I’ll never forget when…” The reminiscing ilk tend to remember inane details rather than anything of historical significance. Such was the Harley reminiscer. He remembered a building that stood across the street where a now vacant lot stands. The building apparently burned down when he was in high school and a school friend’s uncle worked in the building. Although we asked what the uncle did, what kind of business was there, how big the building was, was it an old building, any idea of the cause of the fire, etc. etc., we only learned that the uncle had a lisp and was meanly called Snakey because words with “s” were difficult to pronounce. We were getting all sorts of amusingly-told stories about Snakey and the embarrassing situations he was in but nothing about the building or what the area was like 30 years ago. I welcomed the quartet launching into a raucous version of Coltrane’s “Softly as in a Morning Sunrise,” which pretty much cut off the Snakey stories. The club began to fill in. The band played a number of swing jazz tunes and were into “Mercy, Mercy, Mercy,” coming close to the end of their first set before the Harley guys decided to ride off into the night. I wonder if anything of note took place that night to create a story worth reminiscing?
Posted by Jeff Winke at 5:23 PM No comments:

A gorgeous night with a modest-size crowd filtering in. Had a crazy couple of women sitting at the bar when I arrived. Because no one else had yet walked in, they assumed the role of long-time customers asking when so-and-so and somebody-or-another will arrive and spouting about how they know the club’s owner. One of them wore a white cowboy hat and free-form danced around when the music started. Keeping in her Wild West role she let out a YEE-HAW during a song, which almost had me escorting her out the door.  This is a jazz club, for Buddha’s sake, not some line-dancing saloon. The quintet, plus exquisite jazz singer, played wonderfully. The bartender commented, “It’s a great night for jazz.” You know it is, pardner, I had responded and thought, “Damn, I’m being influenced by the Patsy Cline wannabe.” Fortunately, the club started to fill and cowgirl and her friend left. Like an idiot, I said, “You gals mosey on back sometime, ya hear?” Things settled back into a comfortable equilibrium shortly after country gal and her friend left. As the night came to a close, a regular customer showed up with his son and son’s girlfriend. He introduced me to the young couple and said his son is a cage fighter. That caught my attention so I went over and said, “Explain.” Turns out he’s on the brink of turning pro in the UFC (Ultimate Fighting Championship) and has won five of his last six fights.  The match he lost gave him 12 stitches above his left eye (found out that it was better that the cut was on the right-hand side so it bled around his eye rather than closer to his nose where the blood runs in his eye). The 26-year-old kid is strong but he told me that ultimate fighting is more about balance, agility, and chess-match-figuring-out what your opponent’s next move will be. So he’s in intense training now to be prepared to turn pro. A smart, strong young guy with a pretty face that only has one scar on it.
Posted by Jeff Winke at 3:09 PM No comments: 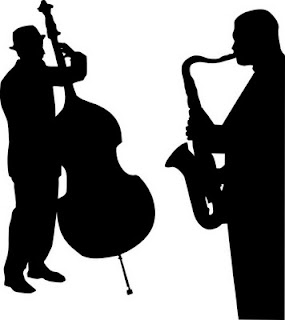 As The Doorman, I typically arrive at the club early to have the time to exchange a few quiet moments with the bartender. We exchange pleasantries, breathe deeply, collect our energies, and prepare for the night ahead. Tonight I was running late for my normal time, but was on time as far as my expected time. Our ritual was disrupted so I helped put the glass-jar-candles on the tables—the final dressing of the club—and immediately began welcoming guests. There was a steady flow until the place was nearly full. The quartet was energized by the crowd and at one point invited up to play a hand percussionist, who was in the crowd with his wife. The musician ran out to his car and brought in a stool and a pair of natural wood bongos and sat in on a couple of songs. The group easily transitioned into Latin jazz songs that they knew. The night was made good by two couples, both pairs new to the jazz club. One couple said that the whole favorable tone for the club was set by “you, the bouncer, being dressed in a coat and tie.” I acknowledged the compliment but quickly and tactfully corrected the error, “I am NOT a bouncer; I am The Doorman.” (Unfortunately, many do not distinguish between a gorilla dressed in a SECURITY t-shirt and the cultivated coterie of professional doorpeople.) The other jazz-loving couple exclaimed that the club is as good, if not better, than any jazz club they’ve been to in New York, Chicago, Berlin, or Madrid. The atmosphere, music, and staff are top drawer in their estimation. Both couples are currently competing for the best and favorite patrons.
Posted by Jeff Winke at 4:54 PM No comments: 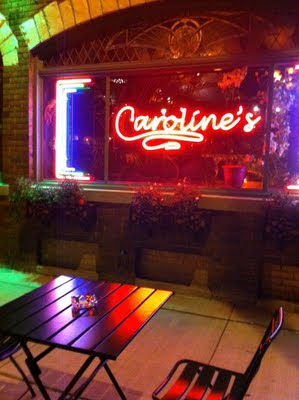 Beautiful spring neon-drenched night… the door and windows flung wide open to take it all in. Excellent jazz trio filled the club with cat-paw, velvet-soft standards and original arrangements. It was a perfect night. And like perfect nights there was a sense of unsettled desire in the city. Many were racing from there to here and back… searching for the ethereal “in place.” I could see it in the mad eyes of those in the cars that zipped past, halted, took sharp turns, and did donut-360’s to go back the direction from where they came. Searching… searching in fear that they’re missing out. The few jazz fans we had were wonderful. They exuded the calm of those that knew they were in the best place in the universe. They soaked up the mellow vibe of the trio and returned it with true and grand appreciation. The group played like they were headlining at Newport. After one of the late-night breaks, the club was empty except for a table of three young jazz lovers on leave from the Great Lakes Naval Base. The band knew they had to play. And they had to play well. The three had finished their training and were awaiting departure orders—one to San Diego, one to Virginia and then to San Diego, and the third to Japan. Two young earnest-looking handsome guys—one of which grew up in a jazz-loving family—and a too young woman with deep, dark-brown soulful eyes that were portals to a million warm sensual spring nights like tonight. It was tempting, but I could not look into her beautiful eyes for long… fearing I’d be lost in the cosmic netherworld only to emerge somewhere in the warm embrace of a straightjacket. A wonderful night for jazz.
Posted by Jeff Winke at 12:15 PM No comments: