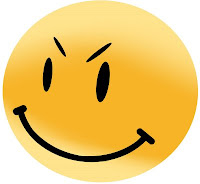 First, before you read further, you need to understand that I am biased. This is an opinion piece. My opinion. Got it? I hate Wal-Mart. I hate their old TV commercials with the plain, but pleasant-looking woman with her faux-Southern accent saying in double-length syllables, “Welcome to Wal-Mart!” I want to say, “Shut up you bitch – quit trying to replicate the feel of walking into some rural general store that’s been serving the community for more decades than your sorry ass has been around." I hate the bouncing yellow smile face and the stupid $16.23 lowest prices on their new commercials. No one ever liked the original yellow smiley face buttons, coffee mugs and t-shirts from the early 1970’s and no one likes it animated and bouncing around. And the odd-number pricing is just stupid. I hate the greeters. Quit raiding the retirement homes and dressing these old coots up in company uniforms like their clowns and telling them they’re the last defense against shoplifting. Let them enjoy life as respected retirees. I hate that Wal-Mart plops its stores into rural communities and destroys the struggling small, independent shopkeepers. I hate their sophisticated data collection and predictive purchasing capabilities. I hate that they know people buy more Pop Tarts before-after-and-during hurricanes. I hate that they probably know what my next purchase will be, based on the three times in my life I’ve shopped there. I really hate that they can whip people up into such a buying frenzy for holiday bargains that they’ll break down the door five minutes before opening time and trample to death Jdimytai Damour, a temporary worker at the Green Acres Mall Wal-Mart in Valley Stream, N.Y. at 4:55am on November 28, 2008. You are at fault Wal-Mart. You killed Mr. Damour.
Posted by Jeff Winke at 9:14 PM 2 comments: 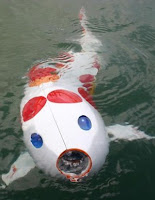 Japanese engineering has spawned another robot. This time it is a robotic koi. Every koi pond needs one since the robo-koi has a camera built into its head – I guess to document the neighbor you suspect has been….ah….errr…..relieving himself in your pond. Plus, the smart carp has sensors for analyzing water quality (you’ll really be able to nail the bastard). The 31-inch, 26-pound fish was developed by Ryomei Engineering (a subsidiary of Mitsubishi Heavy Industries), in cooperation with two other Hiroshima-area engineering companies and will likely be used for more serious scientific and commercial purposes.
Posted by Jeff Winke at 3:46 PM No comments: