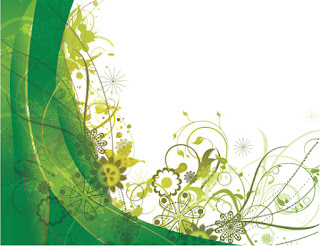 When they walked into the jazz club it was clear. Summer had walked in. Summer was in the form of a black couple dressed in white. The woman wore a white pants suit with white-frame glasses. The man with white suit, white collar-less shirt, and white brim hat. Even his beard was frosted in white. They were cool. When Mr. & Ms. Summer were seated they got to enjoy a dynamic trio—jazz guitar, electric bass, and drums. The jazz guitarist alternated between angry-hornet, superfast playing and intricate fingered rhythms. I greeted two other couples of note beside the epitome of summer couple. There was a couple decked out in black leather that hopped off their Harley and a cute couple with three young kids out celebrating their 12th wedding anniversary. There was also a lone wolf who sat at the bar writing in his notebook (different from the notebook-man who is a regular) and a tall, slender cute wolfette who grabbed a table and enjoyed a couple hours of jazz.
Posted by Jeff Winke at 10:51 AM No comments: 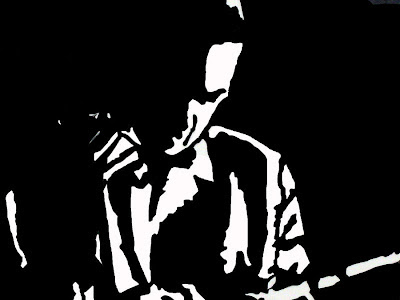 Pleasant breezy Friday eve with front door and windows wide open. Tonight will be pleasant—jazz couple on stage. Singer with incredible voice. When they were getting the mike volume set, she sang “1 - 2 – 3.” Told her, “You can sing from one to 50 and the alphabet, and we’d all be happy.” Her husband is noted and accomplished jazz guitarist who apparently had thoroughly mastered the guitar so he designed and had constructed a three-in-one instrument. Three arms, 18 strings (I think), with bass on the bottom, then guitar, and a mandolin on top. He effortlessly roamed between each layer-cake-stacked instrument—impressive. I think there may be room above the mandolin for a ukulele. I’ll have to start an “Add a Uke” campaign. The crowd was small, because of at least two major events nearby—a big German festival and a gallery night in a nearby arts neighborhood where the artists’ studios, galleries, and two art schools open their doors for the curious public. Gallery night folks who come to the club are in a mooching mode. Filled with free cheap wine, pretzels, and cheese and crackers, they look as though they’ve been asked to explain the chemical structure of matter when a $5 cover is requested. The typical response is “What??” as though they didn’t hear correctly which is followed by a puzzled, hurt look. A couple who had arrived early before the music started was sitting at the bar. When I asked if they planned to stay for the music and then asked for the cover after they said Yes, they got hostile indignant. They demanded to see a written policy and said it’s against the law to request money since they arrived before the show. If I had been thinking, I would have said, “The club policies are all clearly stated and prominently posted outside in back… right above the dumpsters.” 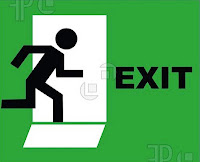 This became very close to being The Doorman’s final entry. If it’s not evident, The Doorman abides by the strictest code of honesty, integrity, and forthrightness, so should that ever be questioned, he will exit through the very door he mans… never to be seen on the premises again. There was serious insidious, innuendo targeted directly at The Doorman this past weekend. The Doorman has zero tolerance for that kind of game and will not play. Fortunately, the club owner, who is not the author of the scandal, blocked the door from slamming shut and reinforced the “unquestioned bond of trust” and confirmed there is absolutely no basis for the defamation. The Doorman will be back at his post at the jazz club this Friday.
Posted by Jeff Winke at 10:44 AM No comments:

In researching who had first recorded You Give Me Fever (Peggy Lee did), I came across this steamy, sultry version of the song by Melbourne Australian-born ‪EQVAY04. What’s totally impressive is that there are no musical instruments—just her voice and finger snaps. Peggy Lee would approve of ‪EQVAY04’s hot, fever-inducing version, for sure! She claims in her notes below the video that "it's hard for me to be 'sexy,'" which will be hard for anyone to believe after watching her performance. Go to:
http://www.youtube.com/watch?v=LuNMcLHhS20
Posted by Jeff Winke at 6:44 PM No comments: 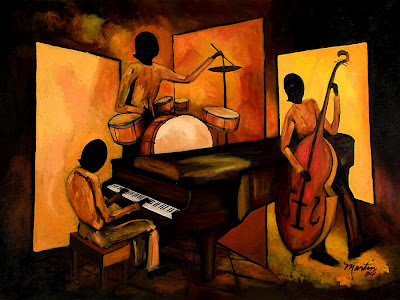 Magic took place tonight. The vocalist we have tonight was contracted just a few days earlier had to round up a trio to back her up. She did a masterful job of collecting three seasoned pros. Each musician—piano/keyboard, stand-up bass, and drums—are incredible. But the catch… they had never played together as a trio.  What was incredibly impressive was to see them flawlessly play together. I was familiar with the keyboard player since he has filled in with the house band where his talents are clearly restrained. In the trio setting he opened up like an enormous firework filling the summer sky. The bass player had such a competent, round-note sound that I asked one of our regular customers who is an old jazz-music educator and authority to tell me what I was hearing. He explained: “Oh, he’s classically trained and sometimes fills in with the Symphony, in addition to having decades of jazz experience.” No shit, is what I thought. He also said that the bassist is a genuinely nice guy and he’s convinced that really good musicians that are really good people have a way of infusing that positive energy into their playing. I said, I know the keyboard player as a somewhat shy, reserved guy who I think of as being a good guy as well. “What about the drummer,” I ask? He’s known as a superlative jazz drummer… the go-to guy when you need an experience drummer… a musician’s musician, is what he said. The vocalist is an old pro and sounds good, but to be honest the magic took place behind her and when she took breaks to rest her voice. Three top-flight jazz musicians who all are apparently nice guys blending their talents together positively. Total magic.
Posted by Jeff Winke at 6:13 PM No comments: 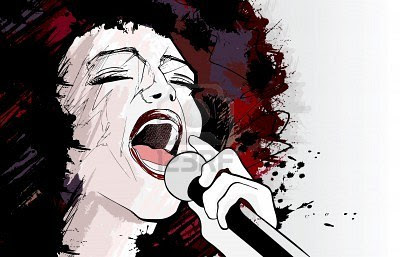 Tonight, the vocalist-piano duet includes two other musicians—drummer and bassist—making them a singer backed up by a jazz trio. It was a necessary transformation from piano lounge act to jazz club performers. The fuller sound makes a difference. With the trio behind her, the singer’s versions of Billie Holliday’s God Bless the Child and Peggy Lee’s You Give Me Fever were over the top. A couple of fun middle-aged women came back tonight. They had been to the club a few months ago and with a little prompting I remembered them. They said they’re working on a book together addressing the issue  of when it’s appropriate to hit or spank a child. “Never, right…,” I asked? “Talk, rather than hit, right?” I was surprised to hear them say that hitting a child can be appropriate. They said that in their African American community there’s too much lack of discipline. “But you can discipline without whacking, right?” As I say, I was surprised and decided it was best to talk about the heat-breaking cooler weather. The vocalist’s husband joined her on stage and they did their unforgettable version of Nat King Cole’s Unforgettable. Hearts swooned. Then the singer and her trio let loose with Dr. Feelgood and it was as though she were leading a revival prayer meeting with her exaggerated voice and movements beckoning the audience. She moaned that when her and her man get to lovin’ they don’t have no time to sit and chat and sit and chit-chat… not when she’s got Dr. Feelgood… The child spankers and everyone else were standing and waving their arms and yelling “that’s right… you tell us, girl!” She, and her trio, made us all feel good… oh yeahhhhh.
Posted by Jeff Winke at 4:05 PM No comments: 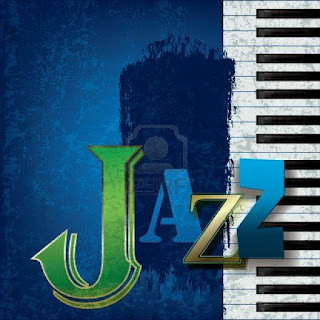 Tonight is a live-recording night. The jazz group whose album will come from this had done this a year ago -- it was a disaster. At that session, the band leader was striving for the impossible: A perfect, error-free performance. If someone missed a note (including himself), he'd yell "STOP!!  Do it over!" Everyone was wound so tight. The music sounded stiff and two-dimensional. The recording engineer supposedly "did a crappy job." I think the recording guy ended up getting stiffed--at least on the editing and mixing end. With that swirl of a cluster in the past, I'm nervous. They play a couple of warm-up songs and were sounding O.K. -- except the trumpet player was sounding like a teenage-boy in puberty; he'd hold a note and then it would break. "Crap," I thought, "not the time for amateur-hour." The recording engineer says, "O.K., with the next song, we're recording." From that point on, the trumpet guy was on fire -- clear, forceful playing, with little twists to add sparkle when it was needed. He was sounding better than ever. The recording session seemed to go well. Our crowd appears to be new folks with a few familiar faces. An old guy who hobbled in with his distinguished-looking cane was singled out as a tenor who had tooted on the first of the 10 albums the group has recorded. With a club that has a dozen years of history and band members who've been in the scene for 30-plus years, I'm the wide-eyed dimple-cheek chump to many who enter this hallowed space.
Posted by Jeff Winke at 3:00 PM No comments:

Two lone wolfettes became fast friends tonight. It was happenstance that they ended up seated next to each other at the bar. Two stools. Two women. By the end of the night they were chatting away and falling into each other with laughter. Nice to see. The jazz group was without its sax tonight. The trumpet guy took over and superbly played songs that ordinarily would have been dominated by the tenor. It was actually refreshing to hear Coltrane, Sonny Rollins and Dexter Gordon songs played totally sax-less -- with the trumpet being the sole horn. We had a respectable size crowd. Someone celebrated a birthday. How old she is was not divulged, although once you get beyond milestone ages like 16, 21, and 30 does it really matter? The night disappeared quickly, just like another year in that ultimate race to reach 100 before death nabs you.
Posted by Jeff Winke at 2:58 PM No comments: