Rant Against the Madness

There is something delightfully cathartic about ranting. There’s a sense of systemic uncontrolled rage exploding. Often it has simmered to the point of the cover popping and jostling until a full out boil blows it off. There is much to rant about – arrogance, injustice, greed, and exploitation to name a few rubric categories. But, I especially like ranters who can control their fury and funnel it into precise language. Especially when the target is the petty and powerful. Company work settings seem to be the Petri dishes for breeding the choicest examples of lunacy. And the lunatics, like scum, tend to float to the top buoyed by their allegiances to rules and protocol that have no footing in common sense. A wonderful rant against the corporate overseers can be found in Mimi Smartypants’ diary entry, An Open Letter To The People In Charge At My Work. In fact, when you’re done reading Open Letter there are other fun rants to read in the diary.
Posted by Jeff Winke at 3:28 PM No comments: 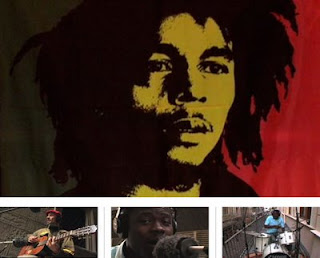 The goal is simple: Create world peace by connecting people and communities around the world through music. The Playing for Change Foundation intends to build connected music schools around the globe. The first school in Guguleto, South Africa will be supported by a network of established musicians and fellow music students in the U.S and abroad.

An incredible YouTube video showcases American bluesman Keb Mo and Spain's Manu Chao playing with a group of 35 musicians, all playing their version together of Bob Marley’s song, “One Love.”
Posted by Jeff Winke at 5:22 PM No comments: