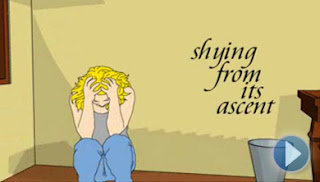 Cool stuff occurs all the time right under our noses. Unbeknownst to me, a series of 34 very cool animated films showcasing contemporary poems were created by University of Wisconsin-Milwaukee students. The unnamed, unrecognized students (tut-tut to the sponsors) worked with docUWM, a documentary media center at the university, and the university’s creative writing program, in association with the Poetry Foundation, located in Chicago. The mission was to focus a new generation of filmmakers on poetry as subject matter. The student-produced films were supervised by Liam Callanan, a creative writing professor and Brad Lichtenstein, a film instructor, both at the UW-Milwaukee. These wonderful short flicks are available on the PBS website and are a part of a grander Poetry Everywhere project that includes prominent poets reading their work with learned introductions from Garrison Keillor.
Posted by Jeff Winke at 6:50 PM No comments: 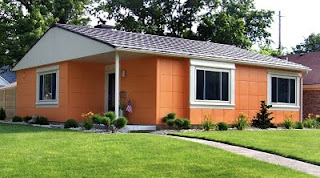 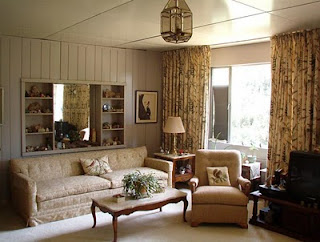 One of many brilliant options available to the post WW-II homebuyer was the all-steel Lustron ranch home. It was entrepreneur Carl Strandlund's brainchild, as an answer to the severe post-war housing shortage. The signature appearance of the Lustron Company home is the two-foot square prefabricated porcelain-enameled steel panels that sided the exterior. Strandlund’s idea was to quickly, efficiently, and economically mass produce homes, like automobiles. The exterior color options were pink, tan, yellow, aqua, blue, green and gray. Interiors were beige or gray. Lustrons were said to cost $6,000 - $10,000 (not including building lot) and were manufactured in the Columbus, Ohio factory in about 400 man-hours. Assembly at the site was advertised to take less than 300 man-hours. The prefabricated, ready-to-assemble houses were shipped in 3,000 pieces. The design uses all interior space efficiently and wisely. Built-ins accounted for 20 percent of the total interior space. The master bedroom had a built-in vanity, with large drawers and additional storage space overhead. Bedrooms had sliding pocket doors to eliminate space needed for door swing. The dining room had a built-in buffet and pass through to the kitchen. Period advertisements proclaimed that the homes were safe from fire, decay, rust, termites, vermin, and rats. Rosemary Thornton  has a terrific series of five articles about the trusty Lustron homes on The Old House Web. About 2,800 of these porcelain-steel houses were produced between 1949 and 1950—with most found sprinkled throughout the Midwest.
Posted by Jeff Winke at 12:15 PM 2 comments: