Tonight's sax and flute player was a highly-paid sales exec with a large local company until he took early retirement a few years ago and returned to music. "The company owned my body and soul in exchange for a great salary," the former captain of industry tells me. "Of course, when I retired, my huge salary disappeared ...as did my wife--guess she loved money more than me." 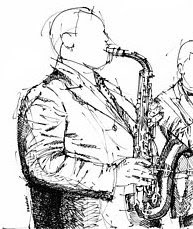 He's recouped, remarried and blows his tenor with the soul of experience and the blues of a survivor. He is effing good! From where I stand at the door, I cannot see the horn players so I can blot out the image of the well-manicured retired business exec playing like the stereotype of the hard-scrabbled, cool jazz cat living in a central-city, cold-water flat. For me, he's a good slap in the head reminding me that the jazz club is the grand equalizer and magnet pulling in all, including a guy that plays phenomenally and has flown in business class more miles than I'll ever be in the air.

The ex-biz-guy tenor is stretching his reeds on a Sonny Rollins tune as the club fills with summer warmth and he and the quintet paint memories of a jazz-hip night for all. A fair-hair Irishman from Dublin is quietly conversing with the mysterious pair of Puerto Rican locals who are rumored to host after-hour parties for artists, poets, theater actors, and musicians where they serve abundant helpings of bacalaito, alcapurria, and pionono. One wonders if the Irishman will luck into the wee-side of tomorrow party.

It's getting within an hour of closing and the jazz club becomes the catch-all for stray cats, the disenfranchised, and the bar-hopping drunks, who I try to deflect into waiting cabs.

I admit to not being good at consistently recognizing the inebriated. Case in point: A 30-something guy presents himself at the door but doesn't want to pay the cover, saying he just wants to get one drink and see if his credit card and ID are here. He takes a couple more steps in and looks around and says: "I've never been in here before." As I grab his arm to gently steer him to the door, he says: "This looks like a great place, I'll have to come back." I try to hand him my professional business card that has the jazz club name, address, and my title, "The Doorman," but he pushes it back saying, "I have a hard time holding onto things, so I'll probably lose it... but thanks."