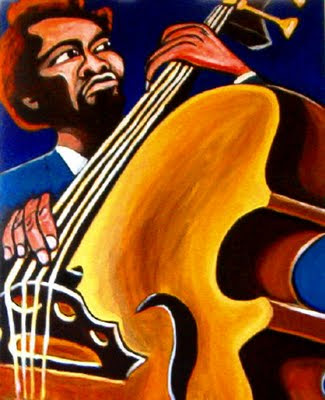 The jazz club was most pleasant. I was not feeling like wearing the formal doorman garb… so I didn’t. Wore my purple Chuckies, black jeans, black checkbox-pattern shirt, a skinny tie inherited from my father-in-law’s 1960’s-70’s wardrobe, and my pitch-black jazzman jacket. The look wouldn’t survive the corporate gray-suit expectations of a downtown bank, but it worked well at the jazz club. One of the first patrons arrived yammering on his cell phone. He looked me over and said into his phone, “Listen, the door guy is wearing Chuck Taylors with a suit and tie, we’ve found our new place.” The quintet with sax and trumpet stirred the souls of the nearly full house with their Mercy, Mercy, Mercy vitality. The eventually New Orleans-bound couple who drink Dr. Peppers (generous thirds of vodka and amaretto, topped with a lesser of Coke) showed up—the guy looking sharp with his black fedora, and his lady looked sassy cute with her short dress. Another fun couple sat a table away. She had black goth eyes, red-auburn pig tails, and a full-leafed, symmetrical tree tattoo on her backless dress back (the tease was there as to how far down the root system might reach). Her mate had a serious, but not overwhelming appearance that juxtaposed nicely against his neat, tied-back pony tail. I later learned, when I was helping them get a taxi, that they were in town on a free-get-out-of-jail respite from their three young kids granted by one of their parents. As I tucked them safely into the taxi, I said “When you come back, remind me who you are and I’ll waive the cover… as parents of young kids, you’ll never have enough money.” The surprised smiles on their faces mixed with the acknowledged “wow-someone-who-understands look” was worth it. On this night in history, the good karma of the purple Chucks was working… we had some interesting, good people in the club and the jazz group was playing tighter than Joan River’s face.
Posted by Jeff Winke at 12:52 PM