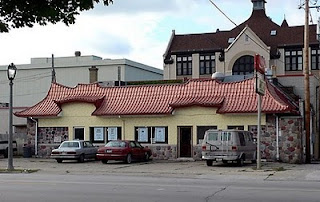 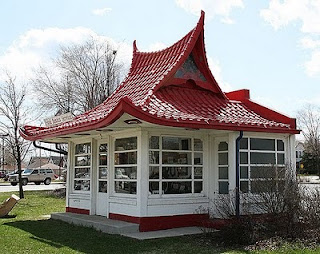 There was a time when gas stations were simple. You drove in, got gas (pumped for you), paid, and drove off. No cigs, big gulps, lottery tickets, or “tasty” sandwiches. In the early part of the last century, the buildings were generally no larger than a single-car garage, with two pumps outside—Regular and Ethyl. Enter Wadhams Oil and Grease Co., Milwaukee, Wis. In 1917, the company hired local architect Alexander C. Eschweiler to design the prototype for their chain of stations. Eschweiler developed an eye-catching Japonist red-roof pagoda design for filling stations that numbered around 100 locations in Wisconsin, Minnesota, and Upper Michigan in their heyday. Each filling station had a different roofline and floor plan. The pagoda-style roofs were made of stamped-metal tiles. Atop the gabled red roofs many stations had cupolas - often multi-tiered - with lanterns hanging from the corners. The walls were black with yellow trim around abundant glass. Most had large plate glass windows on the front, and multi-pane windows covering the sides. The signature pagoda look became one of the earlier examples of architecture forging a brand identity. Today, sadly, only a few remain. One of them, located at South 76th Street and W. National Ave in the Milwaukee suburb of West Allis, was operated by Frank Seneca from 1954-1978 and donated it to the City when he retired. It was restored in 2000 into a window-peeper, mini-museum (photo on left). Another former pagoda station is located at N. 4th St. and W. North Ave. in Milwaukee and houses Grant’s Soul Food Restaurant (photo on right).
Posted by Jeff Winke at 7:36 AM