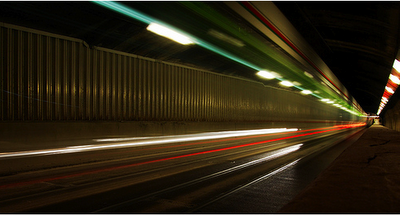 Swoosh is a good word. It’s solid and unpretentious. Used as a verb, it reinforces what its meaning is. A fitting and righteous example of onomatopoeia. To me, it’s one of those words that has greatest impact when the person using it has directly experienced the swoosh first hand…when their breath has been yanked out of their face or their hair has been ruffled by whatever swooshed. It also benefits from the buddy system, pairing up with either the word “past” or “by” – just like good 10-year-olds at summer camp, they tend to hang out together and appear to have a nominal interest in each other’s welfare. Swoosh past and swish by seems to go together like peanut butter and jelly. It’s nice that swoosh defines a more casual use of language. You probably don’t hear it being used much in stockholder meetings, legal briefs, or papal encyclicals. It’s just too informal I suspect. I do need to mention that Nike has co-opted and taken swoosh by force to refer to its logo, which looks and functions more like a checkmark. Every time I see the Nike checkmark logo I can’t help but think that Nike executives sit in their corporate global lair and chuckle in that evil way that exploitive control freaks do and say in a self-congratulatory way, “Yes, yes check off another doofus who is helping to spread our message of world domination.”
Posted by Jeff Winke at 5:53 PM